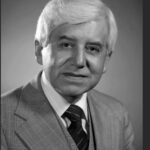 Raúl Eduardo Espinosa, retired Mayo Clinic Consultant in Neurology, of Rochester, MN, died Saturday, September 17, 2022, at the age of 95. He was born June 15, 1927 in Guaduas, Colombia to Jorge and Maria de Jesus (Bernal) Espinosa. He obtained his MD degree in 1954 from the Universidad Javeriana in Bogotá, Colombia, and came to the United States in 1955 as a resident in pathology at Atlantic City Hospital, Atlantic City, N.J. In 1957, he married Agnes M. Füger in New York City, NY. He came to the Mayo Clinic in Rochester, MN that year as a fellow in neurology, joined the Staff in 1961, and retired in 1989. He is survived by his wife, Agnes, son Raúl (Joan), of Rochester, MN, daughter Helena (Marc), of Stillwater, MN, and daughter Elizabeth (Álvaro), of Wayland, MA, six grandchildren, and three great grandchildren. He is preceded in death by his brother. His wit, intellect, and unconditional kindness will be missed by many.