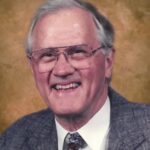 Evansville, Ind. – Raymond L. “Ray” Newnum, M.D. age 96, passed away at his daughter’s home on September 25, 2021. Ray was born on June 18, 1925, in Kingman, Indiana, the son of the late Robert and Sylvia (Alward) Newnum. After graduation from Kingman High School, Ray served in the US Naval Reserves from 1943 to 1947. He was an Aerial Gunner and an Aviation Cadet. He attended Purdue University where he played the saxophone in the Purdue Marching Band. Ray graduated from Indiana University and enrolled at IU School of Medicine. He was a member of Alpha Omega Alpha Medical Honor Society. Following graduation from IU School of Medicine, Ray practiced medicine in Hagerstown, Indiana. He was a Fellow at the Mayo Clinic and the University of Minnesota where he received his Master of Science. He was a consultant in Internal Medicine at Carle Clinic in Urbana, Illinois. He became certified with the American Board of Internal Medicine. Ray practiced Internal Medicine for many years in Evansville.

Ray loved traveling with his wife, Betty. He liked watching IU Basketball, writing poetry, riding horses and flying. One of Ray’s favorite quotes, “A life is only the blink of an eye in the universe of time. How much of it can we see in one blink?”

Ray is preceded in death by his parents, his wife of 67 years, Betty, in 2012 and a son, Michael, brothers, Robert and Charles and sister, Mildred Radcliff.

There will be no visitation or funeral services, at this time due to Covid. Ray will be buried next to his wife, Betty and son, Michael, in West Liberty Cemetery, Covington, IN.

Memorial Contributions may be made to the Raymond and Betty Newnum Scholarship at IU Medical School Evansville Indiana Campus, 515 Walnut St, Evansville, IN 47708, or the American Macular Degeneration Foundation, P.O. Box 515 Northampton, MA 01061-0515.

Condolences may be made online at www.browningfuneral.com