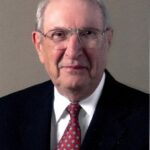 Longtime Mayo Clinic physician and former CEO of the Mayo Clinic in Jacksonville, Richard E. Weeks, M.D. died on January 24, 2021 at Charter House in Rochester, MN. He was 96.

Born in Watertown, NY in 1924, Dr. Weeks was a gifted and disciplined student. He received B.S., M.S. and M.D degrees from Northwestern University in Chicago, IL where he was awarded membership in the Phi Beta Kappa Academic Honor Society, Alpha Omega Alpha Medical Honor Society, and Sigma Xi, the Scientific Research Honor Society. After graduation, he completed a two year internship at Cook County Hospital before entering military service.

He served in the U.S. Army from 1950-54 including nearly three years at the Tokyo Army Hospital where his contribution was acknowledged with the Bronze Star Medal. He ended his military career with an assignment at Walter Reed Medical Center in Washington, DC. He was grateful to spend his time in the military assigned to in-patient medical services and said this experience confirmed his decision to become an internist.
Dr. Weeks returned to civilian life in 1954 when he accepted a residency in Internal Medicine at the Mayo Graduate School of Medicine with a Fellowship in Endocrinology and Metabolism. He became a Consultant in Internal Medicine-Endocrinology specializing in diseases of the adrenal and pituitary glands. For the next 38 years he had a distinguished and varied career with the Mayo Clinic that revealed his exceptional skills as a doctor, an educator, and an administrator.

He retired in 1992 in Florida, after which he and Patricia returned home to Rochester. They eventually moved to Charter House where he served on the governing board. He loved golf, reading, travel, the Mayo Clinic, his colleagues, and his family….especially his wife, Patricia.

A private family service will be held at a later time. Online condolences can be left at www.ranfranzandvinefh.com.

In lieu of flowers, please consider a gift to the Mayo Foundation at https://philanthropy.mayoclinic.org/donateMC or the charity of your choice.