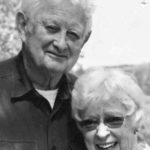 Robert P. “Bob” Gibb died Monday, July 16th after 95 purpose-filled years of living. Bob was born September 11, 1922 in Seattle, Washington as the 2nd of 3 children of Gladys (Swift) and W. Earle Gibb. During the Depression, the family moved to Bellingham, where his mother was born and his father was raised. He attended a relatively young Lowell School. Bob graduated from Bellingham High School in 1940 and attended Washington State College, where he embodied and continued the family tradition of living and breathing all things Cougar. His education there was punctuated by service in the Navy, but he returned to graduate with his class in 1944. Most importantly, he met his lifelong love, Ruthie Carncross, on a blind date in Pullman. They married in 1945 and spent 62 years together until her death in 2009. After Ruth graduated from WSC in 1945, they moved first to Missouri for medical school at Washington University, then on to Connecticut (Yale) and Minnesota (Mayo Clinic) for training. Once again, war interrupted life when Bob was assigned overseas in the Army to medical service in Korea and Japan before completing his residency in clinical pathology back at Mayo. A significant event in their young family life was the reunion of Bob, Ruth and their 3 small children for 8 months in Japan. They returned to Bellingham in 1954, eventually welcoming four more children and spending the rest of their lives in their beloved Bellingham home. Bob began his practice in his father’s medical laboratory as the first pathologist in Whatcom, Skagit and San Juan counties. He ran the lab for 36 years, retiring in 1990. There he directed the Whatcom County Blood Bank and marvelled later as he recalled early days of direct patient-to-patient blood transfusion. He also served as the county medical examiner for many years. Bob was avidly involved in education at all levels. For years, Bellingham 6th graders learned and sometimes fainted during school trip tours of Gibb Lab. From Lowell School PTA president to a member of the Board of Regents at Washington State University, supporting education was a directing force. He helped connect several students to scholarships and advised many more on educational choices (mostly to WSU!). He saw education as the path to a successful and fulfilling life, a belief that he communicated continually to his own kids. For over 25 years, he and Ruth paid at least one higher education tuition bill every semester, every year. Bob served his community with commitment and vigor. He was a member of the Bellingham Rotary Club, the YMCA Board of Directors, the Whatcom County Law and Justice Council, and others. He led the Western Pathologists Quality Assurance Association. He was as diverse as he was committed: a fiscal conservative and an avid environmental conservationist. He was an original member and leader in the Bellingham Greenway Advisory Committee, Responsible Development and the Chuckanut Mountain Park District. Bob was the family activity director/instigator: boating, fishing, hiking, swimming, hunting and gardening were our raisons d’être of many a weekend. In early years, all 7 kids boarded for overnights tucked into a 23 foot boat. Together we built garden rockeries, camped under the stars, hiked in the rain, learned to shoot ducks, caught salmon, and enjoyed his bodacious Sunday “combo” pancakes at the family home. Perhaps as his greatest gift, we were raised to believe that we were capable of anything. Bob was a performer. He had a sense of humor with few boundaries, and loved coming up with sensational events, such as publicly singing questionable songs on his old Gibson guitar or riding a bull into the Crystal Ballroom of the Leopold Hotel as the incoming Rotary president. He loved singing and listening to music, poetry that rhymes,, snorkeling, plant propagation, pulling protein from the sea, and having a fast boat. He wrote poetry for many occasions but mostly to his beloved Ruthie. He wrote an extensive “bio,” recording stories of his life — a gift to his family. In true fashion of a depression-era survivor and conservationist, he loved doing more with less. Most of all, he loved our mom and he loved us. He embodied the expansive era of “The Greatest Generation”, and we will miss him. He is survived by his children: Janis Mercker, Marcy Hipskind (John Costanti), Rhonda (Rick) Barrett, Kathy (Patrick) Ducey, Lisa (Mike) Henniger, Gail (Joost) Knops and Tyler (Sharon) Gibb; his numerous grandchildren and great grandchildren. The family would like to thank Gretchen Herb for her care, helping him remain in his home and aiding all of us so much during his final months. In lieu of flowers, please consider a remembrance gift to Washington State University, the Puget Sound Blood Center, or an environmental cause of your choosing. A Celebration of Life will be held this fall. Online obituary and guestbook is available at Whatcom Cremation and Funeral, wcremation.com