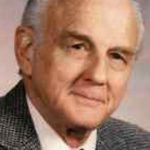 Dr. Robert E. Hyatt, 91, died at his home on Saturday (June 11, 2016) surrounded by loved ones. The cause of death was complications due to Alzheimer’s and vascular dementia.

Dr. Hyatt attended several small, rural schools, until his enrollment into The Peddie School from 1939 to 1943. In 1943, he enlisted in the Navy, and was accepted into the Navy V-12 program at the University of Rochester from which he graduated Phi Beta Kappa in 1945. In September 1945, he entered the University of Rochester School of Medicine and Dentistry and spent 1947-1948 doing research and teaching as a Student Fellow in Nobel Laureate Dr. George Whipple’s Department of Pathology. He graduated in 1950 Alpha Omega Alpha with high distinction. He was an intern, assistant resident and Research Fellow at Barnes Hospital in St. Louis, Mo., in Dr. Barry Woods Department of Medicine.

Dr. Hyatt served as Clinical Associate and then Investigator in the National Heart Institute, National Institute of Health from 1953-1958. During this time, he became interested in lung mechanics which continued the remainder of his research career.  He then served as the Associate Chief of Medicine at the Beckley Memorial Hospital in Beckley, West Virginia, which is a United Mine Worker’s Hospital, from 1958-1962. He was invited to join Mayo Clinic as a Consultant in Physiology and Medicine in 1962. In 1982, he was named the Atherton and Winifred W. Bean Professor of Medicine and Physiology, Mayo Medical School. Much of his professional effort was devoted to research in pulmonary physiology, particularly lung mechanics.  He authored more than 150 scientific papers, and co-authored more than 1,000 publications.  He also has written several textbooks on pulmonary physiology. Dr. Hyatt has been a guest lecturer in many medical centers in America as well as in Brazil, England, Germany, Italy, Spain, Greece, Taiwan, Japan and India.

He took early retirement in 1987. He then opened a part-time solo practice of Internal Medicine in Vandalia, Ill. In 1993, he closed the practice and returned to Mayo Clinic where he was a part-time Consultant in the Division of Thoracic Disease, Emeritus Professor of Physiology and Biophysics and of Internal Medicine, Mayo Medical School. He retired from his part-time practice at the Mayo Clinic in 1999, but remained in an informal capacity until July, 2015.

Robert Hyatt married the late Patricia Anne Craycroft, a graduate of the Washington University School of Nursing, in July 1952.  They had two children. Mark is a board-certified psychiatrist, and currently is the Medical Director of the Adanta Group.  He is also an Associate Clinical Professor at the University of Kentucky College of Medicine. Amanda has a Masters degree in Special Education, and a Ph.D. in Psychology.  She works as a child neuropsychologist in St. Louis Park, Minn.

In 1999, Dr. Hyatt married Elizabeth Small Hartge. During their marriage, they enjoyed traveling, and had shared interests in the environment, politics and social welfare.

As a boy, Dr. Hyatt spent many happy summers at the family log cabin on a lake in the Adirondack Mountains. In 1996, he acquired a cabin on Poplar Lake on the Gunflint Trail in the Boundary Waters Canoe Area. He spent his final summers at the cabin, and always was delighted when family and friends would stop by to visit.

Dr. Hyatt supported many nonprofit organizations. He was active in the Rochester Lion’s Club, enjoying their many worthwhile projects. He also was a long-term member of Christ United Methodist Church, and in the past was actively involved in the mission, outreach, and social justice areas. Dr. Hyatt considered himself fortunate to have gone on eight consecutive Methodist Church-sponsored medical missions to Jalapa, Nicaragua.

He was preceded in death by his parents, his brothers, Leslie Jr. and Frank K. Hyatt, and his first wife, Patricia. He is survived by his son and daughter, a grandson, Robby, a step-grandson, Chris, as well as his brother Leslie’s four children:  Leslie (Jody), Eleanor, Kathryn, and Marcia (Tom).

The funeral service for Dr. Hyatt will be at 2 p.m. Thursday at the Christ United Methodist Church in Rochester. Visitation will be from 5 p.m. to 8 p.m. Wednesday in the River Park Chapel at Macken Funeral Home in Rochester.

Online condolences are welcome at mackenfuneralhome.com.