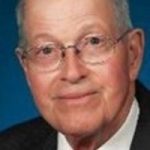 He graduated from Shortridge High School in 1942 and completed his B.S. Degree at Indiana University in 1944. Following graduation in 1947 from Indiana University School ofMedicine, he completed a residency at Methodist Hospital, Indianapolis and a fellowship in Internal Medicine at the Mayo Clinic, Rochester, Minnesota.

During his Mayo Clinic fellowship he was called into active duty. He served in the U.S. Army during the Korean War for two years as Captain in the Medical Corps stationed at Pusan and Taegu, South Korea.

He married Helen Frances Black in 1947. They have two sons, R. Charles Rudesill of Chicago, Illinois; and Geoffrey H. Rudesill of Plano, Texas; and a daughter, Barbara A. Kleinschmidt of Fishers, Indiana. They have five grandchildren and three great grandchildren.Predeceasing him is his sister, Helen Gwyneth Chroniak, of Indianapolis.

In 1954 he started in private practice of internal medicine in Indianapolis with his father. Bob served as President of the Indiana Society of Internal Medicine and as an officer on the medical staffs at Methodist and Winona Hospitals. He was Diplomate of the American Board of Internal Medicine in 1955. He was a member of Alpha Omega Alpha Honor Medical Society and Nu Sigma Nu professional fraternity. In 1964 he became a Fellow of the American College of Physicians. He received the Joseph E. Walther Distinguished Physician’s Award for service to Winona Hospital. After closing his office in 1999, Bob volunteered at the Good Samaritan Health Clinic in Indianapolis.

An active amateur cellist, Bob performed for many years in the Athenaeum Orchestra and in chamber music ensembles and workshops. He was a member of St. Paul’s Episcopal Church where he served on the vestry, Sigma Alpha Epsilon fraternity and Adjutant of American Legion Paul Coble Post #26, whose members include Dentists and Doctors. He was a member of the Indianapolis Literary Club and the Contemporary Club. Later in retirement, he volunteered at Day Spring Center, an emergency shelter for families and children.

An avid fisherman, Bob spent summer vacations fishing in northern Wisconsin, and also took fishing trips to Canada, Ireland, Bahamas and many states in the U.S.

Memorial contributions can be made to the Indianapolis Symphony Orchestra, Ensemble Music Society of Indianapolis, St. Paul’s Episcopal Church or the Alzheimers Association