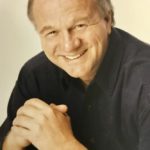 Born and raised in Sheboygan, WI, Robert attended Sheboygan North High School for two years, completing his secondary education at Lawrenceville School in New Jersey. He majored in English at Amherst College before graduating from Yale School of Medicine in 1966. He completed his surgical internship at St. Luke’s Hospital in New York City and his orthopaedic residency at the Mayo Clinic in Rochester, Minnesota. As a third-year medical school student, he completed a 10-week foreign fellowship at the Mission Hospital in Ganta, Liberia. He later volunteered as a general surgeon in Vietnam, caring for Vietnamese civilians who were injured in the conflict.

In 1972, Robert married Judith Spielman. Together they moved from Rochester, MN, to Albuquerque, NM, where Robert took a position with the University of New Mexico Department of Orthopaedics. After five years at UNM he went into private practice. Following Judi’s death from leukemia in 1988, Robert worked hard to raise his three sons while maintaining his surgical practice. In 1996, he married Patty Anderson. At the end of his career he returned to UNM as an assistant professor instructing orthopaedic residents at the VA Clinic in Albuquerque. He was appointed by the Governor of New Mexico as a physician board member of the New Mexico Medical Board, which he felt was a great honor.

Robert was a member of the First Presbyterian Church of Albuquerque. He enjoyed golf, skiing, and white water rafting with his family; singing with the New Mexico Symphony Orchestra Chorus and participating in musicals throughout out his life.

In lieu of flowers, memorials are preferred to the Parkinson’s Foundation.

A memorial service will be held at Friday, August 3, 2018, 10:00 a.m., at First Presbyterian Church, 215 Locust St NE. Private interment will be held at Sunset Memorial Park. Please visit our online guestbook for Robert at