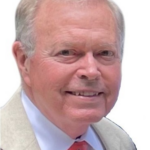 Robert “Bob” Milton Miles, MD, died at his home on Sunday, October 2, 2022. He was the devoted husband of Bonnie Ayres Miles for 53 years. Bob was a retired allergist/immunologist who practiced medicine in Lynchburg for 25 years.

Bob was born in Roanoke, VA on October 28, 1941, to the late Winston B. Miles and the late Mary W. Miles. He was predeceased by his brother, Wendell R. Miles, and his sister, Patricia M. Miles.

In addition to his wife, Bob is also survived by their two sons: Robert “Blake” Miles and his wife, Katherine, of Lynchburg and Laird A. Miles and his wife, Amanda, of Fort Mill, SC. Bob was a loving father and grandfather who found great joy in his relationships with his four grandchildren: Robert “Bryant” Miles and Elizabeth C. Miles of Lynchburg and Hadley L. Miles and Sawyer W. Miles of Fort Mill. Bob is also survived by his sister, Ruby Miles, of Forest, VA, and his sister-in-law, Lynne W. Ayres, of Hilliard, OH.

Bob grew up in Lynch Station, VA. He was a 1960 graduate of Altavista High School and a 1964 graduate of the University of Virginia with a BA degree in botany. Bob was honored to live on The Lawn during his senior year at UVA. He then completed his medical degree at The Medical College of Virginia in Richmond in 1968. Thereafter, Bob remained at MCV for three years, completing a one-year internship and a two-year residency in pediatrics. He served as chief resident in pediatrics during his second year of residency. Between his internship and residency, Bob and Bonnie were married in 1969.

From 1971 to 1973, Bob served his country in the United States Air Force as a pediatrician and the chief of pediatrics at Lajes Field Air Base, Terceira Island, Azores, Portugal. In the Azores, Bob received a recognition of honor from the commanding general of Lajes Field for personal service to the People to People Program. Bob was honorably discharged from the Air Force with the rank of major.

Upon returning to Virginia, Bob practiced pediatrics at Physicians to Children in Roanoke from 1973 to 1980. In 1980, he, Bonnie, and their growing family moved to Rochester, MN, where he completed a two-year fellowship in allergy and immunology at the Mayo Clinic.

Upon completion of the fellowship, the Miles family moved to Lynchburg in 1982, where, with Bonnie’s able assistance and support, Bob established and then maintained his allergy and immunology practice until his retirement in 2007. He was a kind and compassionate physician whose work as a physician was a true “labor of love.”

Bob was a true Southern gentleman. He enjoyed a lifelong interest in and passion for plants, particularly flowers, which resulted in his long-time membership in and service to the Hill City Master Gardener Association.

Bob was a member of First Presbyterian Church, where a celebration of his life will be held on Saturday, November 19, 2022 at 11:00 am. The family will greet friends at a reception in the church narthex following the ceremony.