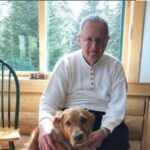 Robert (Bob) Anthony Murray Jr passed away peacefully May 15, 2021, with Joan, his wife of 65 years – as always – by his side. Bob was father to Cathy, Christine, and Greg; grandfather to Natalie (Hanson) Lares and Emily Hanson, Philippe Tousignant, Patrick Tousignant and Isabelle Tousignant, Peter Murray and Margaret Murray and, great grandfather to Ava Lares. In addition to Joan, Bob is survived by his sisters, Jane (John) Buzzelli and Mary Alice (Mike) Haverland.

Bob was born In Duluth, Minnesota October 14, 1931, to Robert and Georgianne Murray and spent most of his youth on the Iron Range, graduating from Hibbing High School. After attending the University of St. Thomas in St. Paul, MN, he went on to medical school at the University of Minnesota. He married Joan Marie Infelise August 20,1955. Shortly thereafter, they moved to Hawaii where Bob served as a flight surgeon based at Hickam Air Force Base in Hawaii. Upon returning stateside, Bob completed residency training in pathology at the Mayo Clinic in Rochester, MN. Following his training, he began a long career at St. Cloud Hospital in St. Cloud, MN.

His nearly 90 years on this earth represent a life well-lived. From the perspective of his children, this meant many things:

A love of everyday adventure: from creating wonderful, stop motion films of them as babies (definitely ahead of its time!), to designing and building their childhood home on the Mississippi River where summers were spent cruising in the river, water-skiing and fishing off the dock and winters of skating on a rink lovingly created and tended to by dad on his tractor, or speeding around on snowmobiles. He patiently repaired boat propellors after collisions with one of the many hidden deadheads in the water or snowmobile dents sustained by overly exuberant trail rides.

A love of travel: vacation adventures included car trips to historic sites (who can forget the blisters?!), helicopter rides in California, surprise trips to visit old haunts in Hawaii. The family travelled the upper-Midwest in their GMC motorhome and through Europe in a red VW van – all without cellphones or Google maps!

An appreciation of the arts: while his children may not have fully appreciated these opportunities at the time, they were lucky to have their parents bring them to live performances of the Metropolitan Opera and concerts featuring the U.S. Marine Corps Band where Bob enjoyed silent chuckles as their sleepy, nodding heads snapped to attention at the sound of cymbals crashing! He loved to play all sorts of music at home – mostly wonderful – but with a bit of eye rolling from the family when he played his favorite Souza marches at top volume on the stereo!

An appreciation of the North Shore: Bob and Joan’s retirement to the “Norwegian Riviera” (a/k/a, Knife River on the shore of Lake Superior) led to more adventures and memories as big family gatherings included bonfires by the lake and rock hunts. All the grandchildren loved visiting there, even as they grew into adulthood, spurred on by Bob’s love of the lake. He delighted equally in sunny, sparkling waters and majestic storms with giant waves. Watching the freighters and boats go by was a favorite pastime.

From the community perspective, Bob’s life was one of dedication and hard work providing decades of thoughtful medical care. It was a life of good deeds and generosity as a member of the Catholic Church and Rotary International, and philanthropy to educational institutions and charities.

Reflecting on his life as it ends, the family is grateful for the time we had with him and the legacy he left us. His life well-lived ultimately meant a unique combination of complete love and dedication to his wife and children above all; faith in God and a constant and unwavering strength and presence in all of our lives.

We are so thankful for the staff at Benedictine Living Community – Marywood and the Essentia Health Hospice team, especially Therese, who shepherded Bob with dignity through these last challenging weeks with the utmost professionalism, warmth and compassion.

There will be a small, private Mass of Christian Burial, Friday, June 4, 2021; reception to follow. In lieu of flowers, please consider donations to the Benedictine Living Community Foundation (Duluth).