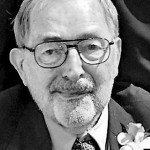 Dr. Robert Repp Rynearson was born in Rochester, Minnesota to Edward H. and Lida Repp Rynearson.  He graduated from Harvard University in 1954 and returned to attend the University of Minnesota Medical School.  It was there he met his wife of almost 60 years, Marjorie Baum Rynearson.  They were married in 1956.  “Bob,” as he was known to everyone who knew him, obtained his medical degree from the University of Minnesota in 1958.  That same year, Marjie and Bob had their first son, Edward H. Rynearson, II and moved to Seattle for an internship at Virginia Mason Hospital.

Bob moved his young family back to Rochester in 1959 to complete residency training in psychiatry at the Mayo Clinic under Dr. Howard Rome, and then became assistant medical director of the Rochester State Hospital in 1962.  Their second and third sons, James F. Rynearson and Philip H. Rynearson were both born in Rochester, MN.

Bob was recruited to leave Rochester to come to Temple, Texas to establish a department of psychiatry at Scott & White Memorial Hospital in 1965.  He was soon joined by Dr. Warren Stewart and Dr. Rich Gaines in the fast-growing department, and the rest, as they say, was history.  By 1967, Bob and Marjie had put down permanent roots in Temple.  They had their fourth son in 1970, Robert R. Rynearson, Jr.

During his tenure as chair of Department of Psychiatry from October 1965 to June 1997, Dr. Rynearson saw thousands of patients and he and his team developed innovations in patient care.  “Profile Self – Confrontation” a therapeutic process using a video monitor and two video cameras, as well as the art therapy program he ran with his great friend and talented artist Forest Gist, were the two of the more significant.

Dr. Rynearson taught hundreds of Texas A&M Health Science Center College of Medicine students and was instrumental in establishing the graduate medical education program in psychiatry. His passion for teaching resulted in the establishment by the Department of Psychiatry of the Robert R. Rynearson, MD Award for Excellence in Teaching, in which students and residents vote for the best teacher in mental health at Scott & White.  Dr. Rynearson was the first honoree of the award in 1997.

For over two decades, Bob’s annual Helen Scott Saulsbury Lecture brought world-renowned medical speakers to Temple, including Dr. Benjamin Spock, Masters & Johnson, Jonas Salk, and many others.  Additionally, he was a frequent oral board examiner for the American Board of Psychiatry and Neurology.  His expertise was in demand by the public sector as evidenced by him being asked to serve by Lt. Governor Ben Barnes on a Blue Ribbon Advisory Committee on youth drug and rehabilitation.

Bob and Marjie wrote, produced and starred in “Hypochondriasis and Health Care – A Tug of War” which won the National Golden Eagle CINE Award, presented in NYC, followed by a media tour including the Phil Donahue show, The Dick Cavett Show, and many others.

After his retirement from Scott & white Clinic in 1997, Bob published his memoir, “Time to Listen.”  This year, Dr. Robert R. Rynearson, Sr. was bestowed the honor of Fellow of Scott & White Clinic, Class of 2016.

Bob was a powerful role model for his four sons.  Their father/son annual canoe trips were legendary.  All four sons grew to love the outdoors, became environmentalists, and all adopted “the canoe trip attitude” and applied it to their lives.  The Fall was always the time for bird hunting, Bob’s other great passion.

Bob was a lifelong artist.  He discovered his passion by carving wooden animal sculptures as a child.  In Temple, Bob and Marjie built a ceramic studio and a silk screen studio at their home. Later, with Marjie’s encouragement, Bob spent his last twenty-five years sculpting massive pieces of Italian marble into rich, archetypal, iconic pieces of art that fill the family sculpture garden and home.

An avid reader and consummate student, his art, his life, and his work in psychiatry were truly intertwined.  He was a great husband, a loving father, and a caring grandfather, and he will be truly missed.

Dr. Robert Rynearson’s father – Edward H. Rynearson, M.D. (I 1932) – was head of Mayo Clinic Endocrinology and a professor of medicine for many decades with the Mayo Clinic.

Please send donations in honor of Bob to the Temple Civic Theater.

Obituary was originally published in the Temple Daily Telegram.