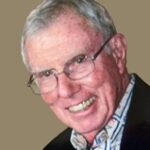 Dr. Robert “Buck” M. Wright, age 85, passed peacefully at 9:14 AM Tuesday, April 28, 2020, at his home. He lived his entire life in Pekin.
He was born on July 9, 1934, in Peoria, Illinois, the son of Dr. Nelson and Melba (Blank) Wright, Jr. of Pekin.
He married Mary Kathryn Martens on June 18, 1960 in Pekin. She preceded him in death in 1986. He later married Gloria Jean DuPage on July 16, 1987 in Pekin. She preceded him in death in 2008. At his death, he was married to Gwen Daily. They married in Morton, Illinois on July 9, 2011 and she survives.
Also surviving is one brother, Dr. Nelson “Pete” (Barbara) Wright, III; and one nephew Dr. David (Kay) Wright of Springfield, IL. One niece, Carol and one cousin, Barbara Lueck preceded him in death. He leaves two great-nephews David and Luke Wright.
Also surviving are three stepchildren and their families; Steven (Michele Schnupp) Daily of Milwaukee, Wisconsin; Cynthia (William) Sites of Nashville, Tennessee, and Craig (Ronda) Daily of Morton, Illinois. He also leaves three step granddaughters and five great step grandchildren.
Dr. Wright graduated from Pekin High School in 1952, and then attended his beloved Kenyon College. He graduated from the University of Illinois with his Doctor of Medicine in 1960. He interned at Illinois Central Hospital in Chicago Illinois in 1961, and he successfully completed his Fellow and Resident in Radiology at the Mayo Clinic in Rochester Minnesota in 1964. He was appointed as a First Lieutenant in the Reserve Medical Corps of the United States Air Force during his internship in Chicago.
After completion of his education, he started his career by joining the Pekin Radiology Group through the Pekin Hospital. He retired from his radiology practice in 1996.
During his high school career, he was an avid tennis player, winning the Illinois High School Association state doubles championship with his partner Doyle Glass in the 1951-52 season. The 1950-51-52 Pekin Boys Tennis teams, coached by John Moss, were inducted into the Greater Peoria Sports Hall of Fame with a combined 80-1-0 record.
He loved playing golf with his friends at Pekin Country Club, where he was a board member. He enjoyed classical music and travelling with his wife Gwen to Chicago for many performances of the Opera and the Symphony.
He was a member of Grace United Methodist Church where he was active in group Bible studies and attended services regularly.
Buck was a quiet philanthropist in Central Illinois. His generosity touched so many who needed financial support. Never one to let others know of his work, he spent time finding causes who could use the most help. One of those is the Center for Prevention of Abuse (CFPA), which provides a glimmer of hope for women and children in need of safety. The CFPA established its second domestic violence emergency shelter in Pekin Illinois in 2011 called the Carol House of Hope. His brother Dr. Nelson “Pete” and his wife Barb donated their medical practice building to the shelter to honor the memory of their daughter, Carol Wright. Dr. Robert Wright and his wife Gwen joined Pete and Barbara in this donation and continued
to support this project throughout the rest of his life.
His family is thankful for all the physicians, especially Dr. Curtis Fischer, the Unity Point Hospice and the care and compassion shown by his personal caregiver Debbie who had cared for him over the years.
In lieu of flowers, donations may be made to Center for Prevention of Abuse, P.O. Box 3855, Peoria, IL 61612. Please make check payable to CFPA and include ‘Carol House of Hope’ in the memo line. Donations may also be made to Grace United Methodist Church, 601 North 4th Street, Pekin Il 61554.
Private funeral services will be held at Henderson Funeral Home & Crematory with Rev. Eric Swanson officiating. Interment will be in Glendale Memorial Gardens. A Celebration of Life will be held at a later date.
Dr. Wright’s tribute page is available at www.hendersonfuneralcare.com where condolences may also be sent to his family.