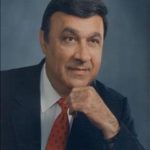 It is with great sadness that we announce the passing of our husband, father, grandfather, great-grandfather, and brother Ronald Lee Kaye, M.D. on March 3, 2018. Ron died suddenly and without suffering. Ron was born on April 15, 1932 in Toledo, Ohio to Philip Kaminsky and Gertrude Mae Berman, who predeceased him. He met his beloved wife, Tobye Fay Davidson, at summer camp in 1949, when Ron was 18 and Tobye 14½, and the two were married in 1955 in Detroit.

Ron received his A.B. (1953) and M.D. (1957) from the University of Michigan and after a year of internship at Sinai Hospital in Detroit, moved to Rochester, Minnesota, where he completed an Internal Medical residency and Rheumatology fellowship at the Mayo Clinic. Ron interrupted his post-graduate medical training to serve his country as a captain in the U.S. Air Force at George Air Force Base in southern California.

Ron and Tobye moved to Palo Alto in 1963 where Ron founded the Rheumatology Department at the Palo Alto Clinic (now the Palo Alto Medical Foundation – PAMF), and served as chair of the department until his retirement from clinical practice in 1997. He continued as Director of Continuing Medical Education at PAMF until this past December, completing more than 54 years of service at PAMF.

Ron’s many professional achievements included teaching numerous medical students, residents, and rheumatology fellows as a Clinical Professor of Medicine at Stanford. He was chair of the California Medical Association’s Committee on Continuing Medical Education (CME) which established continuing medical education re-licensing standards for all physicians in the state, and later for the nation through the American Medical Association’s Committee on CME. He also established scientific interchange between the Peking Medical School and Stanford, as one of the first Americans to travel to China in 1979. Ron authored or co-authored almost forty scientific papers and book chapters, and served as president of several local and national medical organizations. He received the first Philip S. Hench Award for Excellence in Rheumatology at the Mayo Clinic, was elected to the Royal Society of Medicine (London) and the American College of Physicians, and was honored by the Arthritis Foundation and the Santa Clara Medical Society.

Ron was also very active in the Jewish community. He led the Israel Bond drive at Stanford after the Six Day War, served on the Magen David Adom national board, co-founded the Sino-Judaic Institute, co-organized the first Jewish bioethics conference at Hebrew Union College, and served on several committees and attended many classes at Congregation Beth Am in Los Altos Hills, where he and Tobye were members for almost 55 years.

A clarinet and saxophone player, Ron had the opportunity during high school to play with Benny Goodman and his Orchestra as well as to personally interview Gen. Dwight Eisenhower while serving as the DeVilbiss High School newspaper’s managing editor.

Ron traveled the world with Tobye, visiting several countries. He was an talented artist, fan of Stanford and University of Michigan sports, music lover, and collector of minerals, stamps, coins, and toy soldiers.

Ron’s family was the most important part of his life. He was a devoted husband to Tobye, father to Brian (Fran), Todd (Julie), Douglas (Cyndi) and Jeffrey (Rhonda), grandfather to Naomi (Honza), Ilan, Joshua, Ari, Shaina, Doniel, Micaela, Asher, Jonah and Avi Kaye, great-grandfather to Ezra, brother to Jerry Kaye (Elsa), and uncle and cousin to many. Ron was a special friend to many, including his numerous patients, and went out of his way to help countless people. He will be missed tremendously by the innumerable people whose lives he touched, but his memory and wonderful deeds will forever live on in all of our hearts.

Memorial services and burial were held on March 6, 2018. For those who wish to honor Ron, please consider making a donation to Congregation Beth Am, the Palo Alto Medical Foundation, the American Friends of Magen David Adom, or the charity of your choice.