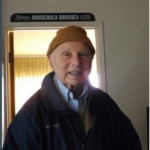 Sam Thal
December 31, 1925 – July 25, 2022
Dr. Sam Thal came to San Francisco, the city he loved, in 1955 after receiving his MD degree from the University of Washington School of Medicine and doing a residency in internal medicine at the Mayo Clinic. He worked for the Veterans Administration in the East Bay and was on the UCSF Clinical Faculty for 47 years, retiring as Clinical Professor of Medicine.
He was a long-time donor and/or volunteer for the American Conservatory Theater library, Merola Opera Program, San Francisco Ballet Horizons Foundation, the Castro Senior Center, the Gay and Lesbian Historical Society, and the Bay Area Physicians for Human Rights (BAPHR). He served on the BAPHR Board of Directors for over 30 years and was also secretary, historian, and editor of their newsletter. In addition, he was a member of New Leaf (closed in 2010), Gay and Lesbian Medical Association, Commonwealth Club, American Legion Alexander Hamilton Post 448, Prime Timers, and other medical, cultural, and historical organizations. He was a founding member of Congregation Sha’ar Zahav, San Francisco.
He died July 25, 2022, at The Sequoias San Francisco. A private memorial service was held at the Hills of Eternity Memorial Park. Donations in his memory may be made to any of the organizations listed above.