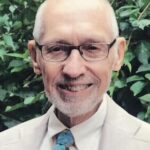 Wendell was a physician, a musician, a sailor, a craftsman, a tinkerer, a ponderer, an avid reader, a student of philosophy and religion, and a Christian. He loved poems, songs and wordplay. He was pun-stoppable.

Wendell was born to Rev. Samuel and Hazel (Meckenstock) Obetz in Allentown, Pennsylvania, in 1930. The family moved to Chicago when he was a teenager. In high school he was voted president of his class, valedictorian, and “brainiest.” He earned a master’s degree in physics from Northwestern University and another from the University of Chicago.

He enrolled in Naval Officer Candidate School and served as a U.S. Navy Intelligence Officer with the United States Seventh Fleet for three years.

Upon returning to Chicago he met his wife, Elizabeth (Winne). They were married in August 1958. That fall, he entered medical school at the University of Illinois-Chicago. Following his graduation in 1962 they moved to Detroit where he was a medical intern at Detroit Receiving Hospital. Their son Timothy was born that year.

In 1963, the family moved to Rochester, Minnesota, where Wendell began a residency at the Mayo Clinic, beginning in Internal Medicine, ultimately transitioning to Psychiatry and adding a Child and Adolescent Psychiatry Fellowship. He joined the Mayo Clinic staff as a Consultant in Child and Adolescent Psychiatry in 1968 where he remained until his retirement in 1996. In Rochester the couple had two more children, Julia and Christopher.

Wendell and Betty became members of the Rochester Covenant Church in 1964, where Wendell began his decades-long involvement with the church’s education and music programs, including playing the organ at the church. Later, when the church was constructing a new building to house its growing congregation, Wendell spearheaded a significant fundraising endeavor to acquire and install a new pipe organ for the sanctuary. Wendell described his passion for this initiative in a Rochester Post Bulletin article, dated March 22, 1985: “Music at Covenant is essential, not background. It was time to grow, or regress.”

After his retirement from the Mayo Clinic, Wendell turned his attention to playing chamber music, woodworking, and sailing. He is remembered by family and friends alike for his acute insight, his enduring kindness and compassion, and his empathetic engagement with others.

The world was a better place with him here.

Wendell was preceded in death by his parents Samuel and Hazel, and brother John. Surviving him are his wife Elizabeth, his children Timothy (Mira), Julia, and Christopher (Paola), his sister Janet Hofmeister, grandchildren Cecilia and Lucas, and many nieces and nephews.

The family would like to thank Mayo Clinic Hospice for their immeasurable kindness and support over the last year.

Memorial service to be held at a later date.

In lieu of flowers, Wendell’s family suggests donations to Doctors without Borders (https://www.doctorswithoutborders.org/).