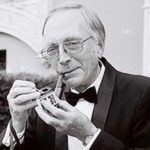 Phillips, Sidney F., M.D. Sidney F. Phillips, M.D., was born September 4, 1933, in Melbourne, Australia and died November 9, 2019 in Saint Paul, Minnesota. Sid reached the pinnacle of his professional field, gastroenterology, and his life was filled with all that made him happiest: family, travel, theater, music, learning, teaching, good food, and good wine. He was as content to intently discuss a column in The New York Times as he was to sing bawdy rugby songs after a few too many glasses of wine. Sid, his wife, Decima, and his young daughter, Penelope, moved from Melbourne, Australia, to London where Sid pursued medical training. The family later moved to Rochester, MN for a “two-year fellowship” at the Mayor Clinic that ultimately lasted more than 35 years. The couple’s two younger children, Nichola and David, were born in Rochester. Sidney was a doctor, researcher and instructor at the Mayo Clinic, where he received the highest levels of international recognition and awards throughout his career for his “preeminence as a skilled clinical investigator who unraveled the mysteries of the intestine,” as his colleagues wrote upon his retirement. One of his Fellows described Sid as the “best teacher and mentor he ever had.” Sid and Decima loved entertaining guests from around the world, and were active in the Wine & Food Society. Sid fondly recalled his involvement with Rochester Community Theater productions of Gilbert & Sullivan classics. After retirement, Sid and Decima moved to Lowertown Saint Paul to be closer to their children and grandchildren. They divided their time between St. Paul and London and returned frequently to visit friends and family in Australia. They were married for more than 60 years. In retirement, Sid and Decima made many new friends and came to enjoy the Twin Cities cultural offerings, including the Saint Paul Chamber Orchestra, the Schubert Club, the Guthrie Theater (Sid was an inaugural season ticket holder)); and the restaurant Meritage on St. Peter Street, where Sidney and Decima dined weekly. Sid will be missed by many. The extended Phillips family lives in the Saint Paul area: Decima, Penelope, her husband Joe McKinley, and children Edward and Margaret; Nichola, her husband Martey Jakel, and children Owen and Emilia; and David, his wife Laura (McEllistrem), and children Charlie, Lily and Sophie.