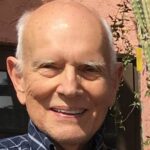 Thomas R Johnson, M.D. Died November 4, 2021 in Potomac, MD. He was born in Cloquet, MN shortly after moving to Le Sueur, MN. Tom received undergraduate and Medical School degrees from the University of Minnesota. He served an internship in the Public Health Service in New Orleans and then served at the U.S. Atomic Energy Commission in Gaithersburg, MD. Following his discharge he completed a Residency in OB-GYN at the Mayo Clinic in Rochester, MN. He married Carol Dehring in 1966. Upon establishing a private practice in OB-GYN in Rockville and Gaithersburg, MD he also held consulting positions with the Executive Office of the White House and the National Labor Relations Board. He was an attending physician at three local hospitals in suburban Washinton, D.C. for thirty years. Tom was elected to the American College of OB-GYN in 1968. Tom was a member of the University of Maryland Chorus and the Chevy Chase United Methodist Choir for many years. After retiring in 1996 he and his wife moved to Tucson, AZ.
Tom was a founding member of the Tucson Symphony Chorus and also served as a Trustee on the Tucson Symphony Board and as President of the SaddleBrooke Symphony Guild.