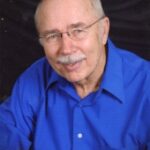 It is with great sadness that the family of Doctor Thomas Jerome Miller announces his passing on August 26, 2018 at the age of eighty-five. T.J. will be lovingly remembered by Helen O’Keefe-Miller his former wife whom he married in 1957, and the mother of his five children, Tom (Kally), Patti, Dan (Barb), Kathy (Jon), and Julia. He will also be fondly remembered by his nine grandchildren, A.J., Tony, Riley (Jessica), Steven, Brandon (Jacque), T.J., Alex, Maria, and Laura and five great grandchildren Makayla, Abigail, Mark, John, and Olivia. His siblings Marion, Jean, Val, Rosie, and Mark will also forever remember T.J. Thomas Jerome was preceded in death by his beloved companion Nancy Jo McElroy. He is also preceded in death by his parents Andrew and Helen Miller, and by his two brothers Bill and Dan Miller. Raised in Crosby, North Dakota, T.J. was a member of the high school marching band where he played the clarinet. He took this skill to college and played in the Notre Dame Marching Band where he received his undergraduate degree. He attended medical school at the University of North Dakota and Marquette University and completed his residency in Duluth, Minnesota. He specialized in Ophthalmology at the Mayo Clinic in Rochester, Minnesota. He began his medical practice in Billings, Montana in 1964. He practiced medicine until age seventy-seven and the state awarded him an honorary 50 years of service certificate. T.J. was an avid golfer and won the annual Highland Fling in 1972 with his colleague John Hammerel MD. He loved the outdoors, camping, fishing and hunting throughout Montana. He traveled extensively and enjoyed sailing. The Vigil will be held on Monday, September 3rd at 6:00 P.M. at Dahl Funeral Chapel. Mass of the Resurrection will be celebrated at St. Pius X Catholic Church on Tuesday, September 4th at 11:00 A.M. There will be a private interment on Wednesday, September 5th. St. Pius X Catholic Church has been selected to receive memorial contributions.