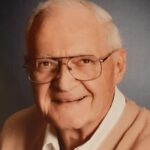 Tim is survived by Mary Jean, his devoted wife of 64 years, and four daughters: Michelle (husband Bruce McIntosh) of Beaverton, OR; Maureen (husband Rick Link) of San Diego, CA; Kathleen of Kansas City, and Sheila (husband Duane McNaney) of Georgetown, TX.  He is also survived by eight grandchildren: Ian, Kevin, and Katie McIntosh; Shannon, Connor, and Rory Link; Megan and James McNaney and great-granddaughter Maggie McIntosh. He is also survived by his sister-in-law Cecilia Dalton and many nieces and nephews.

Tim grew up in our Lady of Good Counsel Parish, Kansas City.  He completed high school at Conception Abbey in 1945 followed by 2 years as a divinity student at Conception Seminary.  Tim graduated from Rockhurst College in (1951) with a B.A. in Biology and Philosophy.  He continued his education at Creighton University School of Medicine where he graduated with his MD in 1955.  From 1955-1956, he interned St. Mary’s Hospital Kansas City where he met his wife Jean.  He completed his residency in anesthesiology at Mayo Clinic, Rochester, MN (1958-1961).  In 1961, he returned to Kansas City where he began his 27 years career with Anesthesia Associated of Kansas City practicing at many hospitals including Research Medical Center, Children’s Mercy Hospital, St. Mary’s of Blue Springs and the Research Belton Hospital.

Tim was a veteran of the United States Army achieving the rank of Lieutenant Colonel. He served in post WWII Germany as part of the Peace Keeping Forces and Medical Corps from 1956-1958.  He remained active in the U.S. Army Reserves until retirement.

He was a founding member of St. Thomas More Catholic Church and remained an active member there for over 50 years serving many roles including Eucharistic minister and school board member. He had a strong devotion to his faith and lived it every day through his words and deeds.  He was much loved by all who knew him, and he will be missed!