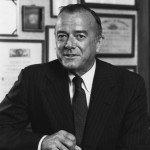 Dr. W. Gene Mayberry presided over a period of dramatic growth and change as president and CEO of Mayo Clinic from 1976 to 1987.

“He lived a full life,” Paul Mayberry said of his father. “He accomplished everything he set out to do.”

Mayberry also championed early efforts in diversity and creating diversification activities to help support the hospital’s mission for clinical practice, education and research, according to a Mayo Clinic statement.

“Through change we move forward, it’s how we grow,” Mayberry once said. “Discomfort with change is only to be expected. With time, we realize that on the whole, change has been marvelously good for Mayo.”

Originally from Tennessee, Mayberry was a 1953 graduate of the University of Tennessee School of Medicine. Mayberry also was a veteran who served two years in the Navy before his post-graduate work in endocrinology. He continued his studies at Mayo Graduate School of Medicine, the University of Minnesota, New England Center Hospital and the National Institute of Arthritis and Metabolic Diseases. For research, Mayberry’s main interest was thyroid function.

After joining the Mayo Clinic staff in 1960 as a consultant in medicine, Mayberry spent the majority of his 36-year professional career at Mayo and served as chairman of the Department of Laboratory Medicine from 1970 to 1975. He was also a professor of laboratory medicine and professor of medicine at Mayo Medical School.
In 1987, Mayberry was appointed by President Ronald Reagan to head the presidential advisory commission on the AIDS epidemic.

He also served on many different civic boards and was a member of several different medical and administrative professional associations.

Mayberry was preceded in death by his wife, Jane, and his brother, Thomas. He is survived by his son, Paul of Atlanta, and his daughter, Ann Mayberry, of Chicago, and six grandchildren.

“We’re sad to have lost him,” Paul Mayberry said, “but very happy that he has gone on the journey that he wanted.”

Funeral arrangements were being made by Ranfranz and Vine Funeral Home in Rochester.

Originally published in the Post-Bulletin.