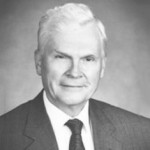 Wendell came to the United States at the age of seven, and later became an Eagle Scout. He graduated from Mankato High School in 1949, earned a B.A. degree from Gustavus Adolphus College, St. Peter, MN in 1953, and an M.D. in 1957 from the University of Minnesota.

Dr. Johnson married Marilyn Jean Brust June 25, 1957 in Lead, SD. He completed an internship at St. Mary’s Hospital, Duluth, MN, in 1958, followed by an ophthalmology fellowship at the Mayo Graduate School of Medicine, Rochester, MN, 1958 – 1961. He also received an M.S. in Ophthalmology from the University of Minnesota, in 1961. He served as Lt. Commander in the U.S. Public Health Service in Gallup, NM, and in 1964 joined the McFarland Clinic in Ames, IA, where he practiced as an ophthalmic surgeon until his retirement in September 1997.

Dr. Johnson was a Diplomate of the American Academy of Ophthalmology, Fellow of the American College of Surgeons, member of the Iowa Academy of Ophthalmology, American Medical Association, life member of the Iowa Medical Society, Fellow of the Royal College of Physicians, member and past president of the Mayo Eye Alumni Association. He served on the Iowa State Grievance Committee, the Society for the Prevention of Blindness, McFarland Clinic Executive Committee, past president, and McFarland Clinic Building Corporation. He was an active member of Bethesda Lutheran Church of Ames, past president of the congregation, on the congregation council, and as a 50-year choir member, Ames Rotary Club, Paul Harris Fellow, Ametones Barbershop Chorus, ISU Alumni Association, and the Ames Golf and Country Club. He and Marilyn were longtime ISU sport and music event attendees, having held ISU football season tickets since 1964.

Funeral services will be held Sunday, October 25th at 1:00 pm at BRADSHAW CELEBRATION OF LIFE CENTER, 2800 Curve Crest Blvd., Stillwater with visitation one hour prior to the service. A private family burial will be in the Mt. Olivet Lutheran Cemetery, Mankato, MN. Memorials may be directed to Bethesda Lutheran Church, Ames, IA, Gustavus Adolphus College, St. Peter, MN, or charity of your choice. Bradshaw 651-439-5511