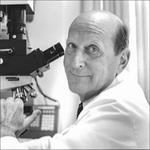 Dr. William G. Battaile Passed away peacefully on December 18, 2019 at his home in Bethesda, Maryland. He was 94 years old. He was born February 26, 1925, in Memphis, Tennessee, to William G. and Anne (Turbeville) Battaile. He obtained his BA degree from Catholic University and then went on to graduate from Georgetown Medical School in 1953. He served two years in the Army Medical Corps as a pathology resident at Ft. Meade, Maryland. He went on to complete his pathology residency at the Mayo Clinic in Rochester, Minnesota. Dr. Battaile began his career as clinical director of the Oscar B. Hunter Laboratory at Sibley Memorial Hospital in Washington, DC. He went on to have a long and distinguished career at Sibley as Chief of Pathology. He also served a term as President of the American Association of Blood Banks and as Chief of Medical Staff at Sibley. He is survived by his beloved wife of 65 years, Eleanor (Borsody), and their 10 children, Anne Riemer (Hans) of Massachusetts, Caroline Crosby of Massachusetts, Mary Alvarado (Ron) of California, Susan Ansley of Maryland, John of Maryland, Lawrence (Melinda) of North Carolina, William (Britta) of Maryland, Barbara (Mike) of California, Sally of Maryland and Andrew (Tina) of Maryland. He is also survived by 22 grandchildren and two great-grandchildren. He was predeceased by his parents, two sisters, Anne and Margaret, and three brothers, John, Frank and Joseph. He is survived by one brother, Andrew of Mississippi, and numerous nieces and nephews. He was famous for taking photos and videos of all events over the years. Few escaped his fervor to chronicle the family’s growth. He took tremendous pride in his many children and was a dedicated husband. He was also a man of great faith. He will be missed for his generosity, patience, great sense of humor and love of family. He believed all people were created as equals and lived that out in his life. A Funeral Mass will be held at Little Flower Church in Bethesda, Maryland on Saturday, December 21, 2019 at 9:30 a.m. with visitation following the service. In lieu of flowers, donations may be made to American Association of Blood Banks National Blood Foundation at www.aabb.org/NBF. Please view and sign the family guestbook at www.pumphreyfuneralhome.com