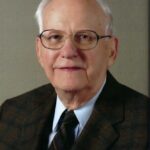 On November 17,1924, Bill was born in Valera, Venezuela, where his parents were Swedish missionaries. He was primarily home-schooled by his mother. After his freshman year at Wheaton College, he was drafted into the army and was honorably discharged. He returned to Wheaton to graduate with a BS degree. Bill received his MD degree from Yale University of Medicine in 1952.

In his last year in medical school, Bill met Jean Boone, who was completing her nursing degree at the University of Connecticut. Shortly after graduation they married on June 14, 1952. They were best friends, traveled the world and always held each other’s hands. They were inseparable for 68 years.

Bill did his internship in Vermont and residency at the Mayo Clinic. He later completed a Nephrology Fellowship in Seattle, Washington. In 1963, Bill returned to the Mayo Clinic as the Head of the first Dialysis Department. Bill was internationally renown in the field of Nephrology and kidney dialysis. He was one of the pioneers in kidney transplantation and patented the early dialysis equipment. He received many awards, participated on medical boards, as well as authored grants and papers. Bill testified in front of Congress to champion Medicare coverage of kidney dialysis. He also received a MS degree from the U of MN. He was a professor at Mayo and U of MN. After 30 years, Bill retired in 1993 as Chair of the Nephrology Department.

Free time was spent on his tree farm near the Whitewater State Park. Bill donated the produce from his vegetable garden to food shelves. He planted thousands of trees and enjoyed identifying trees and birds. He spent summer vacations at their cottage in Michigan. In the winter they traveled to Mexico where Bill practiced his Spanish. He was a great storyteller and liked to laugh at his own jokes as much as telling them. You would often find Bill reading the Wall Street Journal in his recliner. He was a member of the First Presbyterian Church.