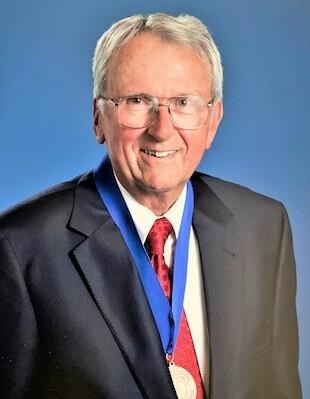 Bill was born on March 17, 1935 in Glen Rock, PA to Arabelle Reichard McCann and George Preston McCann. His family moved to Hershey, PA when he was five months old. In later years, he would say he had a charmed childhood. He spent many summers living with his grandparents and helping with chores like egg gathering and hauling water for chickens.

Later in childhood he began working (as a caddy) at a Hershey golf course, igniting his lifelong enthusiasm for golf. He also nurtured a passion for fishing via fishing holes on his grandparents’ farm, and on ‘party boats’ pursuing sea bass, flounder, sea trout and blow fish at the Jersey Shore and Chesapeake Bay with his father. Through his childhood wafted the exhilarating aroma of chocolate from the Hershey Chocolate Factory.

Bill graduated from Hershey High School in 1953 and Pennsylvania State University in 1957 where he was a member of the Beta Theta Pi Fraternity. He graduated from Jefferson Medical College in 1961, having completed an externship in Albuquerque, NM while in medical school. He interned at Harrisburg Polyclinic Hospital in Harrisburg, PA from 1961-1962, and served as a General Medical Officer in the United States Air Force in Syracuse, NY from 1962-1965. Following a family practice residency at Lancaster General Hospital in Lancaster, PA from 1965-1966, Bill joined the family medicine practice of Dr. Floyd Landis in Leola, PA from 1966-1968. Shortly thereafter he pursued an internal medicine residency followed by a fellowship in cardiology at the Mayo Clinic in Rochester, MN from 1968-1972, and then returned to private practice as a cardiologist in Lancaster County with Dr. Richard Mann. This practice grew and flourished to become The Heart Group. Concurrently, he served as Chairman of the Department of Medicine at Lancaster General Hospital from 1978-1980. He was a mentor to many and an inspiration to all. He retired from the practice in 1987 and worked in occupational medicine at Lancaster General Hospital until his final retirement in 2000. Bill was very invested in medicine and the community and continued to contribute beyond 2000 in many ways such as through the Edward Hand Medical Heritage Foundation (now the Lancaster Medical Heritage Museum) where he served on the board as vice-president and as treasurer and participated in the oral history program in 2008 (Development of Cardiology at LGH) and annual lecture series in 2016 (50 Years of Lancaster Cardiology 1965-2015). He was President of the Lancaster City & County Medical Society in 1986. He served on the board of Hospice & Community Care from 1995-2000, and as the Board Chair in 1998 and 1999. He was a member of the PA Medical Society and the American Medical Association.

Sports were an important part of Bill’s life. From an early age he worked at and played on the Hershey golf course. He played on multiple courses with his father. As an adult, he played on courses around the world including the famed St. Andrews Old Course in Scotland and his all-time favorite, Royal County Down in Northern Ireland. He was a member and former board president of the Lancaster Country Club and ParsOrMore, a Lancaster area golfing group that regularly plays on area golf courses. While in Minnesota, he and his family learned to ski. He was a consummate Penn State sports booster, and a fan of professional golf and tennis.

Bill also appreciated the arts, encouraging his children to learn to play musical instruments and supporting local artists and crafters over the years. He greatly valued education and worked to ensure his children and grandchildren would have access to education opportunities.

Bill loved having family gatherings, especially around the holidays and in the summer picking up bushels of crabs seasoned in Old Bay for cracking on newspaper-covered picnic tables. Everything came full circle for him when he purchased an 80-acre farm in Marticville: growing corn in a co-op arrangement with a neighboring farmer, raising sheep, fishing in the farm’s pond, putting on golf greens he developed and maintained and hosting gathering after gathering of family and friends. One year he and his wife, Bev, hosted an Olympics-themed fundraiser for Hospice & Community Care featuring farm versions of sporting events.

Bill’s death followed a fortunate interval of visits from family and friends made possible as the COVID-19 pandemic finally loosened its grip. The pandemic made it difficult to be connected in person in the 15 months prior to Bill’s passing, but in this instance love found a way. As news of Bill’s death rippled from friend to friend and colleague to colleague, treasured friend Bob Fryer poignantly noted, “Hearts are breaking from here (PA) to Florida.” From the hospital room to the putting green and everywhere in-between, the passing of this man who always led with kindness, who took time with people and who inspired the same in others was felt deeply. Bill’s family is planning a Celebration of Life and looks forward to hearing stories of Bill who always had a story to share of a friendship, an exchange or a moment in the day.

Bill’s final days were eased through the compassion and gentleness of hospice care, the intention and practice of which he long supported. In memory of Bill, please make a contribution to Hospice & Community Care so that Bill can continue to “make his rounds” as he did for decades in the hospital – person by person, family by family – engaging, comforting and lifting hearts, or the Lancaster Medical Heritage Museum, or an organization or charity of your choice.