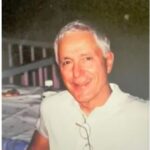 Dr. William R. Myers passed away on October 6, 2022 at his home in Phoenix, Arizona at the age of 92. He was born and raised in Des Moines, Iowa, and attended the University of Iowa for his undergraduate and medical degrees. He remained a loyal Hawkeye throughout his life, feeling the joy of their every win and the pain of their every loss. After medical school, he served two years in the Air Force in Madrid, Spain and then began his training in Internal Medicine at the Mayo Clinic in Rochester, MN. He married Sondra Spindel in 1959, and their marriage lasted to the end of his life. His medical career began in Phoenix in 1961 when he joined Dr. Albert Eckstein in a small internal medicine practice. Bill thoroughly enjoyed the practice of medicine, and he loved (and was loved by) his patients and staff until his retirement in 1999. He served as president of the Maricopa County Medical Society in 1975-1976 and he enjoyed membership in various medical organizations. Bill was a happy man and appreciated the beauty in each and every day. He was known to say, “Enjoy today because once it’s over you will never get it back”. He had a multitude of pleasures and joys in his life. He cherished sunny Arizona days, summers in Coronado, CA, mexican food, especially red chile burros, dogs, and golf games on Wednesdays with his buddies. During his retirement years he worked with a writing coach and published his memoirs to pass on his family history to his children and grandchildren. He wasn’t one to waste time and spent countless hours learning how to become more computer savvy. He was a man of integrity, loyalty and self-discipline. Bill and Sandy had an unbreakable bond. They renewed their wedding vows for their 50th wedding anniversary in a ceremony that was officiated by their son Sam. Of all his accomplishments, his proudest role was as husband to Sondra, father to Laurie (Jonathan) Leighton, Ben (Colette) Myers, Susan Myers, and Sam (Billy) Myers, his eight grandchildren, and his great-grandson. He was a beacon of strength, warmth, guidance and love to his family and friends, and he will be greatly missed. In lieu of flowers, donations may be sent to Congregation Beth Israel in Scottsdale or Hospice of the Valley.