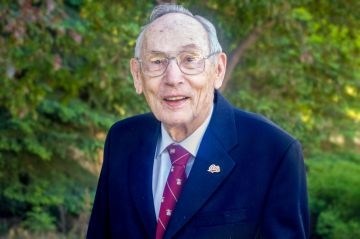 William “”Bill”” Arthur Reynolds died peacefully on Thursday, August 5, 2021. He was a beloved son, brother, husband, grandfather, and friend to many. He considered himself a lifelong Missoulian, serving as a respected physician and community leader.

He was born in Havre, Montana on April 20, 1930, to Nettie Elizabeth Porter Reynolds and F. Gordon Reynolds as the first of two sons. The family soon moved to Missoula where Gordon began a dental practice. Famously, Bill already knew by age five that he wanted to be a doctor, inspired by his physician grandmother. The medical bag that Bill used for house calls in Missoula was hers.

Bill attended summer nursery school at the University of Montana, 1st grade at Roosevelt School, 2nd-8th grade at Paxson School, participating in sports, Boy Scouts, and took piano lessons. As a Missoula County High School student, he excelled in academics, served in student government, National Honor Society, was yearbook editor, played basketball, participated in track, and managed the football team. He graduated Valedictorian in 1948. He attended the University of Montana, was a member of Sigma Chi Fraternity, lettered in varsity track, served in the Air Force ROTC, and was student body president before graduating Cum Laud with B.S. in pre-medical sciences in 1952.

During his childhood years, the entire family enjoyed hunting and fishing and visiting both sets of grandparents who lived in Stevensville MT. In the Bitterroot, they camped and fished at Bass Creek, the Burnt Fork, East and West Forks of the Bitterroot, and Lost Horse. Starting in 1935, his father traded work with the owner of a dude ranch at Lindbergh Lake, allowing the family to spend one week each summer at Laird’s Lodge. The family enjoyed road trips to California including seeing the 1941 World’s Fair in San Francisco, and later attended Rose Bowl parades. In 1946, the family took a 2-week trip to the East Coast, and Bill remembered purchasing a shotgun for hunting in New York City.

During his youth, Bill held many jobs including working in a dental lab, as a floor cleaner at Missoula Drug, on a USFS work crew in Idaho, and as a laborer at Mill Town Dam. He was hired to be park caretaker for the Rattlesnake Creek park (now Greenough Park) by Montana Power Company, and rebuilt an outhouse that had been burned down.

Bill attended Washington University School of Medicine in St. Louis, Missouri, graduating in the top 10% of his class in 1956. Here he met his future wife, Joanne Flanagan. At the invitation of her childhood friend who was married to Bill’s classmate, they met over Thanksgiving dinner. After dating for four months, Bill proposed on April Fool’s Day. They were married on Oct. 6, 1956, in Hendersonville, N.C.

Bill’s medical training and military service took them to Minneapolis MN, Rochester, MN, and Casablanca, Morocco (Nouasseur Air Base) for 2-1/2 years of active duty, and then returning to Rochester, MN. The family’s final move was to Missoula Montana in 1963 where Bill started his medical practice at the Western Montana Clinic as a board-certified internist. They raised three children, supporting their many activities and education. Bill loved to fish and hunt with friends and spend weekends at the family’s Lindbergh Lake cabin.

In addition to a busy medical practice, Bill served as a clinical faculty mentor for medical students and residents for the University of Washington School of Medicine’s WAMI program. He was board-certified in endocrinology and completed an Endocrinology sabbatical at Duke University. He served as the president of the Montana ACP Chapter and conducted clinical research and published papers. In 2019, he was awarded an honorary PhD in Humane Letters by the University of Montana, delighting in his new title as “”Dr. Dr.””

Bill had the Reynolds’ family “”travel gene,”” and he and Joanne became world travelers. They visited over 30 states and 5 countries between 1990-2000 during his leadership years serving on the national Board of Regents Governing Board and as President of the American College of Physicians (ACP). Bill and Jo explored Hawaii, many European countries, Africa, South America, Mexico, Indonesia, New Zealand, Australia, and Alaska. Most Montana summer weekends were spent at Lindbergh Lake, leading their children and grandchildren on hikes, backpacks, and serious huckleberry picking.

Bill was engaged in many community organizations including the First United Methodist Church, and Intermountain Children’s Home, in Helena, MT, where he and Joanne both served on the board. One of his greatest joys was attending and supported Grizzly Athletics at the University of Montana. He also championed and supported student athletics as scholars.

Over the last year, Bill enjoyed living in community at The Springs, often sharing his homemade fudge with new friends. The family is grateful for the love and support given to Bill during his last year by residents and staff. They also appreciate the excellent end of life care by St Patrick’s Hospital, The Village Health and Rehabilitation and Partner’s Hospice.
The family suggests memorials in lieu of flowers to Intermountain, 500 S. Lamborn, Helena, MT 59601 or to the University of Montana Foundation, 950 Arthur Ave., Missoula, MT 69812.

Cremation has taken place. Friends are invited to view photos or write a note at https://www.cremationburialsocietyoftherockies.com/

Bill’s life will be celebrated on Saturday, Aug. 14, 2021, at 10am at the First United Methodist Church, 300 E. Main, followed by a luncheon at the church. Facebook Live Streaming available at https://www.firstumcmissoula.org/