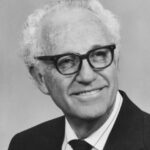 Dr. William (“Bill”) Webb Zeller, was born Jan.25, 1921, and left this earthly life on Sept.19, 2019, having lived more than 98 years. He was known in the Hartford area primarily for his exceptional medical career at the Institute of Living (1954-1981), serving for most of those years as the director of psychiatric education.He also was a clinical Professor of Psychiatry, University of Connecticut and on the consulting staff of the Hartford Hospital’s Mental Health Network. He was an examiner for the American Board of Psychiatry and Neurology (1953-1995) and received the Exemplary Psychiatrist Award for the State of Connecticut in 1995. He was the co-founder and executive secretary of the American Association of Directors of Psychiatric Residency Training. He received an award from The International Association of Health Care Professionals as being one of the “Outstanding Physicians of the World” (2011). For a number of years in the 60’s and 70’s he was one of the key participants in a lecture series sponsored by the Institute of Living, Aetna Insurance Company and the Hartford Courant. The topics pertained to various mental health issues, and the lectures were attended by thousands of people in the Hartford area, and a full transcription of the messages was published in the Hartford Courant the following day. Dr. Zeller was born and raised in Washington D.C., graduating from high school in 1938 as both the Valedictorian and President of the Senior Class. He was an Eagle Scout. He graduated from George Washington University in 1941, and went on to medical school at George Washington University, where he graduated summa cum laude in 1944. Dr. Zeller was part of the U.S. Navy during World War II, and was the Chief Medical Officer, COMPAC, Amphibious Forces of the Pacific in Pearl Harbor, Hawaii. After completing a residency in psychiatry at Mayo Clinic in Rochester, MN, he accepted a position at the Institute of Living in Hartford, CT where his medical career flourished. Dr. Zeller had a warm and winsome personality, a remarkable sense of humor (he was a master punster) and was loved by everyone who knew him, whether it were a famous person whom he treated or a lowly hospital worker. He was a faithful church member, first at the First Church of Christ Congregational in West Hartford, then at the Congregational Church in Bridgton, Maine, and later at the First Church in Old Wethersfield. He resided in West Hartford, South Glastonbury, Hartford, Bridgton (Maine) and Wethersfield. He always enjoyed music: singing in quartets, musical groups, church choirs, and he loved to sing with his guitar. Even at Jefferson House in his last years he would sing solos on a regular basis. He was an excellent tennis player, and played into his late 70’s. He and his family loved their summer cottage in Maine where he actively participated in swimming, boating, fishing and hosting numerous guests. He was predeceased by his first wife Mary, his sons-in- law Mike Marshall and Alan Berkman, and his beloved grandson William Zeller. He is survived by his wife Patricia, who has faithfully remained at his side at Jefferson House these past several years when he required more care. He is also survived by his four children: Billie Lawson, Barbara Zeller, George Zeller(daughter-in-law Anna), and Jacquelyn Contreras (son-in-law Jose), his grandchildren Michael Lawson, Sarah Zeller-Berkman, John Zeller, Amanda Bennett, Samuel Bennett, Molissa Bennett, and his great grandchildren Julian, Gabriel and Amelle. Dr. Zeller is also survived by his wife’s (Patricia’s) four children and spouses and eleven grandchildren, and also by his wife’s siblings and spouses and ten nieces and nephews. The family is greatly indebted to the staff at Jefferson House in Newington for the care they provided in his final years. A memorial service will be held at the First Church of Christ in Wethersfield, CT on October 26 at 3:00p.m. In lieu of flowers, memorial contributions may be made to the National Alliance on Mental Illness (NAMI), check payable to NAMI CT, 1030 New Britain Ave, West Hartford, CT 06110 [NAMICT.org]. A private family burial will take place in Shippensburg, PA.