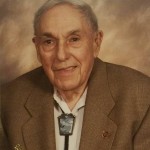 Willis Hubler completed his earthly journey of 93 years, 5 months and 10 days on 16 October 2015 in the comfort of his home.  He was born to Roy and Jennie (Wybenga) Hubler on 6 May 1922 at the family ranch house near Meadow, South Dakota.  Growing up on the ranch, Willis enjoyed the harvest time and played with his dogs.  He learned about horses, and by the time he was nine years old, he was riding his horse four miles to school on good-weather days.  The Great Depression and Dust Bowl caused the family to forfeit its holdings and move to Rochester, Minnesota.  Never did Willis lose his country boy beginnings and was always a humble person of simple needs.

He took advantage of the educational opportunities of this Midwestern town, home of the esteemed Mayo Clinic and was graduated from Rochester High School in 1940.  He attended the University of Minnesota and received a B.A. degree in Chemistry, magna cum laude in 1944.  He was the recipient of the Minneapolis Civic and Commerce Award in 1942.  With the onset of World War II he became an Army Reservist and soon was part of what was a large national program of the military to educate medical doctors.  The entire curriculum was accomplished in three years with no summer vacations.  In March 1946 he received his Medical Bachelor’s degree in Psychology and his Medical Doctor degree from the College of Medicine U of Minnesota in 1947 following an internship.  He went to North Dakota and did General Medical practice.   In 1948 he married Eva Bugbee and a daughter Carol was born to this union.  They were subsequently divorced.

He was privileged to become a Fellow in Internal Medicine at the Mayo Foundation in 1951.  He received a post M.D Master of Science degree for his thesis in 1951.  In 1952 he came west, away from his ragweed allergy, and established his practice of Internal Medicine in Caldwell, Idaho–a practice that was to continue for 40 years.  He became the first board certified Internist in Canyon County.  He was called to active duty from reserve status in June 1955 and was stationed at the Fort Eustis Army Post Hospital as chief medical officer attaining the rank of Major July 1956 and was honorably discharged in June 1957.  His partnership with Dr. L.C. Gabrielsen was instrumental in maintaining the Caldwell practice during his tour of active duty and we are forever grateful to the Gabrielsen family.

Another life event in Caldwell was his marriage to Sharon Transue September 16, 1958.  His daughter Carol and Sharon’s sister Pamela were a perfect start to the family and within six years Jennifer, Timothy, Alicia and Bruce were born.  The core activities of the family were outdoor explorations for rocks and artifacts, fishing, upland bird hunting and in December, 1971, a cabin at Terrace Lakes near Crouch.  He was always proud that all of the children attained post graduate degrees.

During the early 1970s he was program chair for the Idaho Heart Association and arranged educational programs at Sun Valley that brought distinguished professors from California and the Midwest for the two-day conference.  Dr. Hubler, along with Emergency room Physicians at Mercy Medical Center and Caldwell Memorial Hospital (now West Valley) were instrumental in establishing Canyon County’s first public-supported and paramedic-staffed ambulance service in 1975.

He retired from medical practice in 1991.  He kept a list of patients from his last day at work December 31.  As he said at the time, “I’ve enjoyed the personal contact.  A lot of physicians nowadays are depressed by the malpractice suits, government intervention and the paperwork, but I’ve tried to roll with the punches.”

So much more could be said of this person who was an anchor to our family.  We are grieving the loss of our father, husband and colleague who served the Caldwell community with distinction.