The drug, ceritinib, may be a new treatment for inflammatory myofibroblastic tumors (IMT) – a form of sarcoma. This revelation came about because of a single patient whose case also uncovered a possible cause of the rare soft tissue cancer, which doesn’t respond to radiation or chemotherapy.

A 32-year-old man had been treated with another drug, crizotinib, to shrink tumors in his lung, chest and buttock. When his response to that drug stopped, he sought treatment at Mayo Clinic.

Researchers at Mayo already had approval to test ceritinib in patients with lung cancer and thought it might be appropriate for this patient. Aaron Mansfield, M.D. (I ’09, CI ’11, HEMO ’13), Division of Medical Oncology, Mayo Clinic in Rochester, successfully appealed to the drug’s manufacturer, Novartis, for compassionate use. Within two weeks of treatment, the patient began responding to the drug. Eighteen months later, the tumors on his lung and buttock had shrunk enough to remove them surgically. 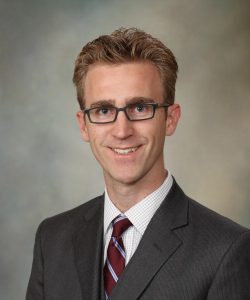 In testing the tumors’ molecular analysis with mate pair sequencing (MPseq), a Mayo team found that the patient’s tumor growth was related to chromoplexy – a complex chromosomal rearrangement that causes genes to scramble, break DNA strands and reassemble in a defective way. The defect found in the patient’s tumor was a chromoplectic TPM3-ALK rearrangement – likely the cause of the cancer.

The Biomarker Discovery Program in the Mayo Clinic Center for Individualized Medicine identified those rearrangements with MPseq, a new advanced type of DNA testing to discover possible causes and treatments for diseases.

“Ceritinib is a more potent ALK inhibitor than crizotinib, and we’d seen responses to ceritinib after failure of crizotinib in lung cancer patients with ALK mutations,” says Dr. Mansfield. “We believe mate pair sequencing identifies complex chromosomal rearrangements more readily than other common tests such as FISH (fluorescence in situ hybridization) and provides much more information overall. I would strongly consider MPseq for all patients with IMT to help identify targetable rearrangements.”

The research team is using MPseq to understand more cases of IMT, lung cancer and mesothelioma. The research was published in the Annals of Oncology in November 2016.