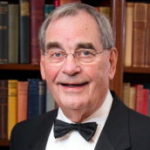 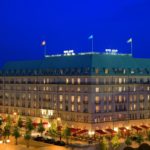 Dr. DeRemee describes his childhood visions of the once-great hotel, the city he found in ruins in 1954 and the reconstruction of the Adlon more than 40 years later, including a memorable meal with his wife at the hotel. 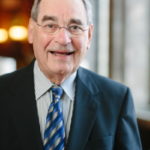 “I first heard of the Hotel Adlon during World War II when I was ten. My father, who was an avid reader of current events, had purchased the recently published book, “Berlin Diary” by William L. Shirer. The book recounted Shire’s experiences in Europe, and particularly in Germany, just prior to the United States’ entry into World War II. His center of activity in Berlin where a popular residence for correspondents was the Hotel Adlon close by the Brandenburg Gate. This hostelry had also been a favorite destination of celebrities, royalty and nobility since the early part of the 20th century creating a mystique of luxury, elegance and mystery.

“… through Shirer’s eyes I could see the frenzied activities of people under great stress, parading through the lobby of the 19th century elegance on their individual paths to certain tragedy. … Situated near the Wilhelm Strasse, the location of many important governmental buildings including Hitler’s chancellery, the Adlon was the victim of collateral damage from allied bombing and was virtually destroyed. When I arrived in Berlin in 1954 for my first visit, the city was in rubble.

“… The Brandenburg Gate was almost black and extensively pock marked from shrapnel. The former Chancellery was nowhere to be seen. The Reichstag was an empty shell. … If I had remembered to see it [the Adlon] out I would have found only a sad pile of rubble.”

In 1991, Dr. DeRemee visited Berlin again, returning to the Pariser Platz where the Adlon had been. He found no trace of the hotel. When he returned in 1997, he visited the Adlon, which had been reconstructed to its original architecture and elegance. He describes a visit to the hotel with his wife. 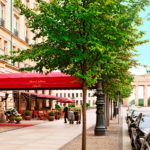 “The venerable [Brandenburg] Gate now emanated a warm ochre glow, a sharp contrast to the depressing gray and black of 1954. After cleaning and patching it looked as though it had just been built. We emerged from the Gate onto Pariser Platz. Up and to the right I saw a simple sign of linear neon displaying the letters A-D-L-O-N. The ghost of Adlon was resurrected! Crystal light blazed through large French windows of its facade. Inside I could make out visions of elegance restored. I was in awe. I had finally reached my Adlon, a fantasy of my youth.

“The small lobby gave no sense of extravagance bur rather a quiet genuine feeling of refinement.” 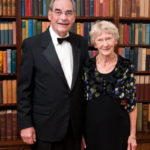 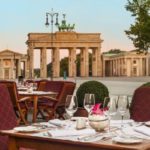 Dr. DeRemee and his wife enjoyed a lovely meal.

“It was near ten when we finally pulled our besotted forms from out the Adlon’s magnetic ambience. … we strolled to the Unter den Linden subway station and took the crowded subway train back to the Bristol. Behind me lay visions of the Adlon, the great war that had come and gone; I could see my father reading Shirer to me so long ago; my youth had returned to maturity; I had an encounter with history.”