Team ophthalmologist – keeping their eyes on the ball

When you hear team physician, you probably think primarily about orthopedic surgeons. Alumnus Robert Marmer, M.D. (OPH ’74) of Atlanta, Georgia, was a team physician for the NBA’s Atlanta Hawks for 35 years and attended every home game as an ophthalmologist.

“Serious injuries occur in sports, and team members can lose their vision or an eye,” says Dr. Marmer, who credits his training at Mayo Clinic with his good fortune to be recruited by professional sports teams.

“Mayo Clinic’s world-renowned reputation isn’t just for a specialty or two. Rather, it’s considered top of the line throughout all of medicine around the world,” he says. “Because of that reputation, I was sought out to do a lot of eye doctoring for sports organizations. 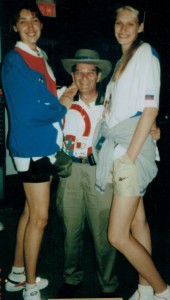 Dr. Marmer with members of the Russian Olympic women’s volleyball team at the 1996 Summer Olympic Games in Atlanta.

A member of the Association of Professional Team Physicians, Dr. Marmer also was a team physician for the Atlanta Glory (American Basketball League women’s team, 1996-1998), Atlanta Knights (International Hockey League minor league team, 1992-1996) and the Atlanta Braves (MLB) for one game when the regular team physician was gone. He was the ophthalmologist in the Olympic Village for the 1996 Summer Olympic Games in Atlanta, serving team members, coaches and trainers.

“I completed my fellowship in ophthalmology from Mayo and then arrived in Atlanta in 1975 to set up practice,” says Dr. Marmer. “I received a letter from Joe O’Toole asking if I would be the team ophthalmologist for the NCAA regional basketball tournament in Atlanta. Joe had trained in physical therapy at Mayo Clinic, and his wife, Rosemary O’Toole, had been a nurse at Saint Marys Hospital. It so happened that Joe also was the basketball trainer for the Hawks. Several weeks after completing the NCAA tournament, I was contacted by the Hawks, asking if I’d be the team ophthalmologist. I chalk a lot of that up to people’s perceptions of Mayo’s medical care and training.” 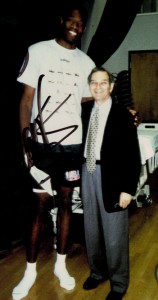 Dr. Marmer with Dikembe Mutombo, who played for the Atlanta Hawks from 1996 to 2001 and recently entered the Basketball Hall of Fame.

Stories from the court

Among his duties was clearing players for trades to the Hawks. Dr. Marmer cleared Moses Malone for trade for the 1988-1989 season on the condition that he wear protective goggles as a Hawks team member. Malone had had a blowout fracture of the orbit of the eye in 1986, putting him at risk for vision loss if he had another eye injury.

Dr. Marmer recalls caring for Dominique Wilkins, one of the most famous Hawks players, 20 years ago. “Even if the Hawks were 50 points ahead, he never wanted to leave a game,” says Dr. Marmer.

Wilkins got an elbow to the eyebrow area during a game, causing a split in his skin and a lot of blood on the court. Trainer O’Toole slapped a towel on Wilkins’ eye, and the trio went to the locker room.

“I was getting xylocaine and a syringe out of a cabinet to anesthetize the area so I could stitch it up,” says Dr. Marmer. “Dominique said, ‘What are you doing, Doc?’ I told him I was getting anesthetic so I could sew up the laceration. He said, ‘Forget about it ¾ just sew me up and get me back in the game.’ So I did it without an anesthetic. He didn’t care if it hurt ¾ he just wanted to get out there.” 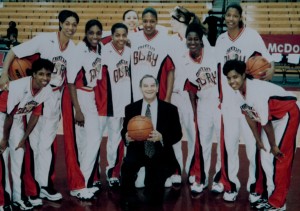 Dr. Marmer with the Atlanta Glory, American Basketball League, in 2002.

Dr. Marmer provided occasional coaching advice, too. Thirty-five years ago at the start of the Hawks’ season, starting point guard John Battle was struggling to make shots, consistently hitting the front of the rim. Coach Mike Fratello was stumped. Dr. Marmer noticed in the previous year’s preseason testing report that Battle had slight strabismus (muscle imbalance in the eyes). He examined Battle and went back to Fratello with a recommendation ¾ tell Battle to shoot for the back of the rim or off the backboard to compensate for the imbalance.

“The next day, he scored 30 points and was high-point scorer for the team in the game,” says Dr. Marmer. “Battle played fine after that.”

Story from the ice

When Dr. Marmer was ophthalmologist for the Atlanta Knights, a player was hit in the eye by a slapshot puck and was hospitalized for a large hyphema (blood inside the front part of the eye) with complications. Dr. Marmer recommended surgery to remove the blood. The player was from Minneapolis, and he told his mother on the phone about the imminent surgery.

“The mother told her son to leave the hospital and return to Minneapolis for surgery,” says Dr. Marmer. “Her son told her I trained at Mayo Clinic, and she had an immediate change of heart. Mayo Clinic made the difference to her. I performed the surgery, and he returned to play some weeks later, wearing eye protection.”

A mission to promote eye protection

Dr. Marmer takes eye protection seriously. “I have one of few practices in Georgia that is an eye injury prevention center,” he says. “I give talks about eye safety and protection to youth sports teams, especially basketball and baseball. A high school student playing in a community basketball league got poked in the eye, his optic nerve was compressed and he lost his vision. Everyone should wear eye protection during sports. Eventually this may catch on. Hockey goalies didn’t used to wear facemasks, and baseball players didn’t wear batting helmets. I’m trying to influence younger players.”

Dr. Marmer, who is originally from Cincinnati, says he’s always enjoyed sports. He ran track at The Ohio State University and was a science tutor for the athletic department when he was getting his master’s degree in neuroanatomy. His father was an amateur flyweight boxing champion for a decade.

“I’ve always been involved in sports,” says Dr. Marmer. “My cousin was an usher at Crosley Field in Cincinnati, so I got to see my idols Pete Rose and Johnny Bench play. As a physician, being part of professional teams, especially when they have spectacular players and are involved in playoffs and championships is exciting ¾ a real high.”